A brand new poster has been unveiled for Claire Denis’ (White Material, Bastards) English-language debut High Life and it subtly shows the relationship at the centre of the film. High Life has been described as a deep space survival film that focuses on a father and daughter that live together in isolation. 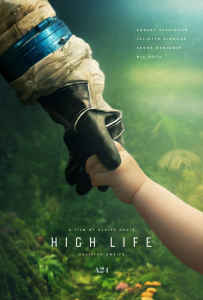 High Life will be released later this year by A24, so obviously we’re very excited to learn more about it. The trailer should land on Wednesday, so it’s not long before we get our wish.