New Poster for Beast is Unleashed

A new poster for the dark drama Beast has been unleashed and it warns you to be careful. The film follows a woman who falls for a mysterious outsider who then encourages her to leave her tight-nit and oppressive family. 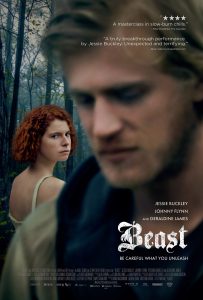 The film has been praised for its brilliant performances – particularly by Buckley – and the trailer showcases a mesmerising and subtly sinister story. Check it out below.

Beast is the feature directorial debut of Michael Pearce and stars Taboo’s Jessie Buckley, Johnny Flynn and Geraldine James. The film will be released on 11th May 2018.