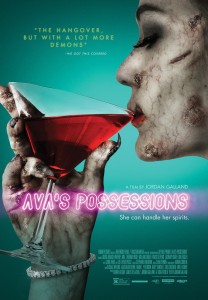 A new poster has been unleashed for Ava’s Possessions; a supernatural horror about a woman’s life post-possession. We’ve definitely had more than our fair share of possession films and, honestly, most of them are not very good. Very few have ventured in to the possessed’s life after their demonic possession – The Last Exorcism 2 explored this idea, but ended up being just another boring, pointless possession flick.

Ava’s Possession seeks to put a fresh spin on the idea of possession and sees Ava attend a Possession Anonymous support group to help get her through her supernatural ordeal. However, it’s not long before she is plagued once again and ghostly visions suggest that the demon is not done with her yet.

You can check out the colourful and subtly funny poster and SXSW trailer for the film below. It looks slightly tongue-in-cheek with a good dash of genuine horror; if it can successfully balance fun and frights well, we could be in for a cult hit treat.