New Poster for The Cured Faces the Disease 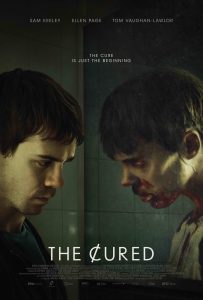 A new poster has been revealed for the upcoming zombie thriller The Cured and it shows Sam Keeley’s character facing himself before he was cured. It’s an effective poster that uses sickly shades of green and yellow to emphasise the illness that cloaks the film’s events, plus the look of that zombie is pretty creepy.

The Cured sounds like the perfect zombie film as it promises a blend of social drama and horror, using the undead and their virus as a way to comment on larger, more familiar issues. The Cured is set 3 years after a cure was found for a virus that turned people into zombies. However, it’s not happily ever after, because society is still afraid of the monsters they once were.

From writer-director David Freyne, The Cured additionally stars Peter Campion, Tom Vaughan-Lawlor, Ellen Page and Stuart Graham. The film will be released in cinemas and On Demand on 23rd February 2018.