A new poster has been unveiled for Baskin director Can Evrenol’s next horror feature Housewife and it touches on the nightmarish quality of dreams. It looks mysterious and eerie, promising “there’s only you and your dreams.” 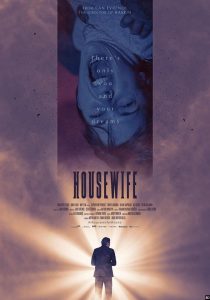 Synopsis:
Holly’s childhood was a nightmare—at age 7, she watched her mother kill her sister and father. Twenty years later, Holly’s dreams remain plagued by that painful memory. An unexpected reunion with an old friend further complicates matters, introducing Holly to a strange cult-like group that follows a celebrity psychic, one who takes a special liking to Holly. And because of him, her worst nightmares become shockingly real.

Baskin was an impressive debut, but we thought it was an overall missed opportunity at being a truly great and brutal cult hit. Hopefully Housewife will push the boundaries of horror further. If you’ve seen the teaser trailer for the film, you’ll know that there looks to be plenty of nightmarish horror and grisly gore.