New Poster Art for Memory: The Origins of Alien

Courtesy of EW, we have the first poster for Memory: The Origins of Alien, a brand new documentary that promises a unique look at 1979’s Alien. Even for fans who think they’ve seen everything, this film should – hopefully – offer something new. 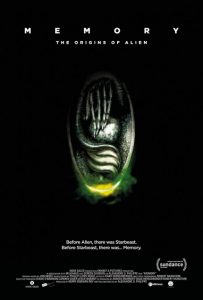 The film has been directed by Alexandre O. Phillipe and will premiere at Sundance. When speaking to EW about the feature, he said:
“Memory is the origin story of Alien, but it really is a full-on mythological take on the film. It’s an exploration of the power of cinema, the power of myths. It’s a very unique look at the original Alien film.

We were very fortunate to be able to work with Diane O’Bannon, who is Dan’s widow, and who is one of our executive producers. She opened Dan’s archive for the very first time, so there’s a lot of stuff that fans of the film have probably heard about but have never seen.”

Look out for Memory: The Origins of Alien in 2019, released to coincide with the 40th Anniversary of Ridley Scott’s Alien.