A new poster has been unveiled for Ari Aster’s feature debut Hereditary and it shines a light on dark family secrets. It’s a nicely detailed design that shows some strange goings-on in a few of the rooms; we hope it’s not to scale, because otherwise, that’s one huge fly. 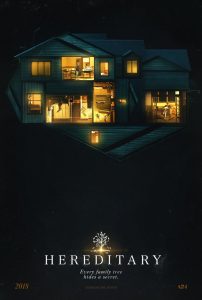 Synopsis:
When Ellen, the matriarch of the Graham family, passes away, her daughter’s family begins to unravel cryptic and increasingly terrifying secrets about their ancestry. The more they discover, the more they find themselves trying to outrun the sinister fate they seem to have inherited. Making his feature debut, writer-director Ari Aster unleashes a nightmare vision of a domestic breakdown that exhibits the craft and precision of a nascent auteur, transforming a familial tragedy into something ominous and deeply disquieting, and pushing the horror movie into chilling new terrain with its shattering portrait of heritage gone to hell.

Hereditary will be released by A24, who has distributed some of the most challenging and excellent genre films of the last few years: Green Room, The Witch and The Blackcoat’s Daughter to name but a few.

Hereditary will debut at the Sundance Film Festival later this year, so look out for those early reactions. The film stars Toni Collette, Zachary Arthur, Mallory Bechtel, Gabriel Byrne and Mark Blockovich.