Magnet Releasing has shared the poster and first trailer for demonic horror film Amulet—and it looks like an excellent day for an exorcism! 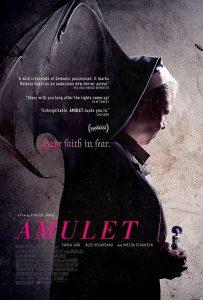 The feature directorial debut of Romola Garai, who also wrote the film, Amulet follows Tomaz, a homeless ex-soldier, who is offered a place to stay in a decaying old house inhabited by the lonely Magda and her dying mother. But even as he starts to fall for Magda, Tomaz cannot ignore his suspicion that something sinister is going on. The mysterious old woman never leaves the top floor—and Magda may in fact be a prisoner to her otherworldly bidding.

Imelda Staunton (Harry Potter and the Order of the Phoenix), Carla Juri (Brimstone), and Alec Secareanu (Strike Back) star in the film, which world premiered at Sundance earlier this year.

Amulet releases in theatres and on demand in the U.S. on July 24th. Grab a crucifix and check out the trailer below.