New Poster for Alien: Covenant Wants You to Hide 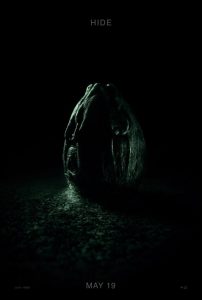 You’re not being told to run this time, you’re being told to hide. I’m not sure what’s scarier, but the egg in the centre of the poster is certainly scarier than the one from the 1979 poster, isn’t it? With the horrifying teaser that was released a few weeks ago and now this terrifying new poster, the marketing team are certainly trying to emphasise the fear in the new addition to the Alien/Prometheus franchise.

Along with this new poster is a promise that a new trailer for Alien: Covenant is to be released tomorrow, so keep your eyes peeled for that. We’re hoping it will show us some more of the film’s scarier moments and a closer look at the nightmare Alien(s) that the Covenant crew encounter.