The first poster for the upcoming New Mutants film imagining has been unveiled and it screams in horror. The film’s first trailer was wonderfully dark and intense and we’re pleased to see that this poster keeps in line with the horror vibe the film is promised to have. 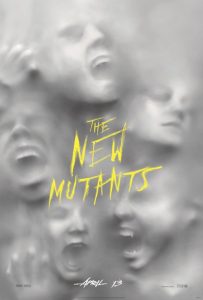 The film’s Twitter account continued the terror with an eerie tweet: “The only thing you have to fear… is yourself.” The New Mutants is fast becoming one of our most anticipated films of next year and we’re excited to see how blending the horror and superhero genres works. If all goes well, hopefully we’ll be treated to even more films that combine two of the most popular genres.

Synopsis:
Five young mutants, just discovering their abilities while held in a secret facility against their will, fight to escape their past sins and save themselves.

The New Mutants comes from The Fault in Our Stars director Josh Boone and stars Maisie Williams, Anya-Taylor Joy, Charlie Heaton, Alice Braga, Henry Zaga and Blu Hunt. The film will be released on Friday 13th April 2018 in Australia, the UK and USA.