It’s just a colour… but it burns… 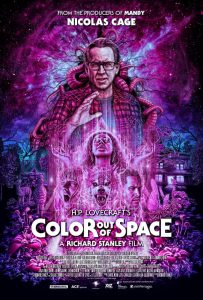 Courtesy of The Dude Designs, the official UK art for Richard Stanley’s cosmic nightmare Color Out of Space is appropriately trippy!

The film, which is based on H.P. Lovecraft’s 1927 short story of the same name, centres around a family whose quiet life is shattered when a meteorite crashes into their front yard, releasing an extraterrestrial threat that slowly infects their farm—and their bodies and minds. Nicolas Cage (Mandy) stars alongside Joely Richardson (Event Horizon), Madeleine Arthur (The Magicians), Brendan Meyer (The Guest), Julian Hilliard (The Haunting of Hill House), Elliot Knight (American Gothic), and Tommy Chong. In addition to directing, Stanley co-wrote the script with Scarlett Amaris.

Add a little colour to your life. Color Out of Space is playing in select cinemas now and will infect DVD, Blu-ray, and 4K UHD on February 24th.