As we start gearing up for the release of It: Chapter Two, a brand new featurette reveals new footage, interviews, and plenty of promises about what’s in store.

“There’s a handful of moments that will make you not sleep at night,” says Jay Ryan, who plays the adult Ben Hanscom in the film. “But the rest of it is this gorgeous journey of life and friendship.” 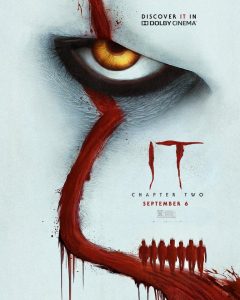 Director Andy Muschietti says they’ve “cranked up the horror aspects” from the first film, with Bill Hader (who plays grown-up Richie Tozier) adding that Muschietti has “gone for broke” with the scares. Considering that the film has been slapped with a hard “R” rating for “disturbing violent content and bloody images throughout, pervasive language, and some crude sexual material,” we can’t wait to see how those scares play out.

It: Chapter Two will see the Losers Club returning to Derry, Maine 27 years after they seemingly defeated the evil that lurks beneath the town. Despite going their separate ways and moving on with their lives, they know they must reunite in order to get rid of Pennywise for good.

“With It, Andy put the people first,” says Stephen King, who authored the original novel more than three decades ago. “And as a result, you have an old-fashioned movie experience where you root for the good guys.”

Check out the featurette below, and don’t miss It: Chapter Two when it floats into theatres and IMAX on September 6th.