10 points to anyone who can spot what previous horror poster this new poster for Amityville: The Awakening has nabbed an image from. 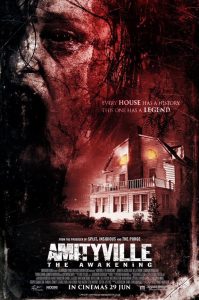 Originally titled The Amityville Horror: The Lost Tapes and then changed to Amityville, Amityville: The Awakening has been knocking around in production hell for almost 2 years, but the film is set to be released next month. Possibly. Fingers crossed. The synopsis can be read below.
Belle, her little sister, and her comatose twin brother move into a new house with their single mother Joan in order to save money to help pay for her brother’s expensive healthcare. But when strange phenomena begin to occur in the house including the miraculous recovery of her brother, Belle begins to suspect her Mother isn’t telling her everything and soon realises they just moved into the infamous Amityville house.

Check out the original trailer from 2014, which was re-released at the beginning last year. It boats a few freaky moments and there is an undeniably eerie atmosphere which is surprisingly effective.