On Twitter, director David F. Sandberg (Lights Out) has shared a behind-the-scenes image from the set of the upcoming sequel Annabelle 2. It shows the possessed doll Annabelle looking as spooky as ever and the director himself, adjusting her head to sit in a seemingly menacing position. 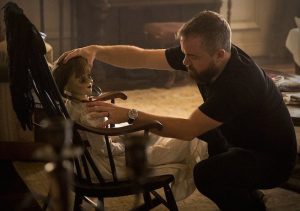 Sandberg also shared the promise of a teaser and stated, “Get ready for an announcement teaser tomorrow!” and here that is, too. It’s a perfect teaser that touches on the eerie tone and atmosphere of the sequel, rather than showing a vast amount of plot details. It’s promising so far, so check it out below.

Synopsis:
A dollmaker and his wife who, 20 years after the death of their little girl, welcome a nun and several orphan girls into their home. Unfortunately, the new guests soon become the targets of the dollmaker’s possessed creation, Annabelle.

We’re excited to see what Sandberg will bring to Annabelle’s table, because the first film was massively disappointing. Sandberg’s Lights Out was an effective chiller – you can read our positive review here – so our hopes are high for his deadly dolly sequel.