Michael Myers appears a little worse for wear in this new image from Halloween Kills—but no less menacing! 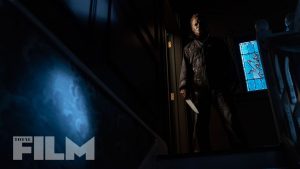 The picture was shared by Total Film and shows Michael looking slightly singed after getting sealed in the burning Strode house at the end of the previous film. Jamie Lee Curtis will reprise the role of Laurie Strode in the sequel, which will see the return of other familiar characters from the franchise, including Sheriff Leigh Brackett (Charles Cyphers), Tommy Doyle (Anthony Michael Hall), Lindsey Wallace (Kyle Richards), and Nurse Marion Chambers (Nancy Stephens).

“It’s about the creation of fear,” director David Gordon Green told Total Film of Halloween Kills. “It’s one thing to be afraid of the Bogey Man—to have someone who might be in the closet, under the bed, creeping around your house… But what we wanted to explore next was confusion, misinformation, and paranoia. What happens when fear goes viral? You can’t just stick your head under the covers any more.

“When we made the last one we wanted to find a way for someone who’s never seen the original to get up to speed with the story. But this one gets right to the action. It’s very aggressive. It’s more efficient. We wanted it to be an explosive middle before things get streamlined and personal again.”

Halloween Kills was co-written by Gordon Green, Danny McBride, and Scott Teems. The film is set to release in cinemas on October 15th, 2021.