We’re guessing that despite the film’s Looking Glass title, the film will have very little to do with Alice in Wonderland. However, the plot does describe “unexplained events”, so maybe it won’t be too far from Alice’s adventures after all.

Synopsis:
Looking Glass follows a couple who, after experiencing a tragic loss, purchases a desert motel only to discover a series of disturbing, unexplained events that take place within one of the frequently requested rooms.

Looking Glass comes from director Tim Hunter, who has a vast array of TV shows to his name, including Wayward Pines, Scream: The TV Series and Hannibal. He has additionally directed the films The Failures and Control. This will be his first film since his 2004 sci-fi thriller with Ray Liotta and Willem Defoe.

Check out a new image from the film below, which shows Cage and his on-screen partner played by Robin Tunney (The Craft, Open Window, The Mentalist), looking a bit frightened of what lies before them. 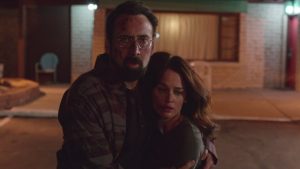 Despite the synopsis seeming frightfully similar to Cage’s previous flick Pay The Ghost, which also saw Cage play one half of a grieving couple, we’re hopeful that this will be a far scarier, thrilling and memorable genre feature.
Looking Glass will be released some time this year.