This New Image from Ghostbusters is Electrifying

A brand new image, courtesy of Empire, has been released from the upcoming female-led Ghostbusters reboot and it shows the new crew rocking hard at a concert. Well, they’re tackling a winged demon, but we’re sure they’re having a great time nonetheless, because this is meant to be the “dance number” that features a cameo from Ozzy Osbourne. 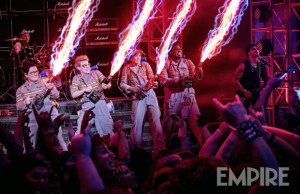 We still haven’t got a proper synopsis yet, but we do know that the new film will feature ghosts from New York’s past. So think old-timey sailors, pilgrims and old-school gangsters. From director Paul Feig (Bridemaids, The Heat), Ghostbusters stars Melissa McCarthy, Kristen Wiig, Chris Hemsworth, and will feature additional cameos from Bill Murray, Sigourney Weaver and Dan Aykroyd.

If you’ve not seen the hilarious trailer yet, then firstly, where the hell have you been? Secondly, we’ve got it for you below, so you can catch up. We hope you’re planning to catch Ghostbusters when it is released on 15th July in the USA and the UK.