A new image has been unleashed for the Soska Sisters’ re-imagining of David Cronenberg’s Rabid. The image shows Jigsaw’s Laura Vandervoort looking a bit ill as she’s treated for a sickness in hospital. 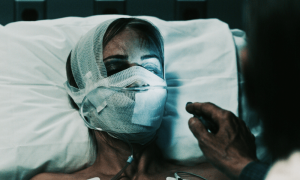 Jen and Sylvia Soska have proved to be a strong force in the horror world with their 2012 feature American Mary and 2014’s sequel See No Evil 2. American Mary’s female-lead fixation is a sign of Rabid’s potential greatness and, if it can be as smart and witty with its horror, we’re sure this new Rabid can be a worthy re-telling of Cronenberg’s cult classic.

71 Entertainment will distribute Rabid in Canada with 101 Films handling the United Kingdom, Back 40 Pictures orchestrating theatrical distribution duties in the United States, and Shout! Studios’ Scream Factory imprint distributing the film across multiple platforms in the U.S.