Director Edgar Wright (Shaun of the Dead, Hot Fuzz) is returning to the world of horror with Last Night in Soho, and ever since the film was pulled from the 2020 release schedule in light of the ongoing health crisis, we’ve been eager to hear more details from the project. Well, Total Film recently shared a brand new image from the film (below) to satiate our hunger! 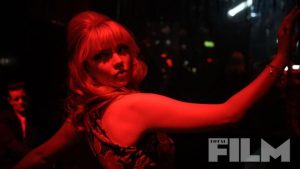 As you can see, the image features star Anya Taylor-Joy (The Witch, Split) and teases the Swinging Sixties setting. Little is known about the plot yet except that it takes place in London’s Soho district and seems to involve some element of time travel.

Thomasin McKenzie (Jojo Rabit, Leave No Trace) also stars in Last Night in Soho, which was co-written by Wright and Krysty Wilson-Cairns (1917, Penny Dreadful). Wright has noted that the film is in the realm of psychological horror and that it will feel very different from his previous work.