Ahead of its US release on May 12th, a new trailer has been released for Ben Young’s SXSW hit Hounds of Love, and it’s one minute of oppressive tension. 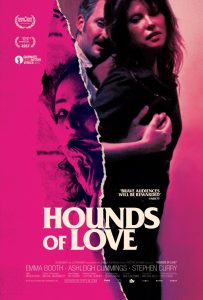 Set in Perth in the mid-‘80s, this tough Australian kidnap thriller stars Ashleigh Cummings (Tomorrow, When the War Began), Emma Booth (Blood Creek), Stephen Curry (Rogue) and Susie Porter (Little Fish). It begins with a succession of women being abducted and killed by serial killer couple John (Curry) and Evelyn White (Booth). When Vicki Maloney (Cummings) becomes their latest catch, she realises she must drive a wedge through the couple if she is to escape alive. The film is said to show its kidnap scenario from the sides of both the victim and aggressors, a detail highlighted in the trailer and previously-released poster art.

Here making his feature debut, writer-director Young is already in pre-production on Universal’s Extinction, which stars Michael Pena and was written by Academy Award nominee Eric Heisserer (Lights Out, Arrival).