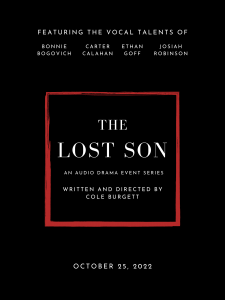 The Lost Son is an upcoming audio drama limited series releasing all three episodes on October 25, just in time for Halloween! Set in 1899, the series follows a medical doctor who is summoned to the ancestral home of her old flame. Upon arriving, she begins uncovering his family’s dark history and the devastating consequences of truths kept secret for generations. Taking inspiration from old-fashioned radio plays and radio mystery theaters, The Lost Son is a love-letter to gothic horror fiction and classic monster films. Starring Bonnie Bogovich, Carter Calahan, Ethan Goff, and Josiah Robinson, The Lost Son is written and directed by Cole Burgett.

You can check out a Sneak Peek at the upcoming series and see the platforms on which it will release on by visiting this link.