Funko is adding a whole host of horror figures to its POP! vinyl line this year, including The Conjuring universe’s Annabelle doll and the demon nun Valak. But it’s also adding to its Hannibal the Cannibal collection with two new toys depicting Anthony Hopkins’ Lecter from The Silence of the Lambs. 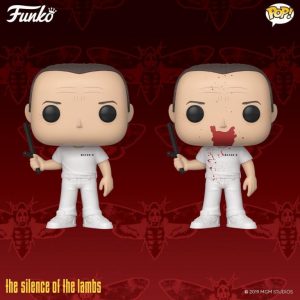 The new toys show Lecter wearing his white prison garb and holding a baton, recreating the iconic scene in which he escapes his cell by beating one guard to death and taking the face off another. The variants serve as a fun little before-and-after, with Lecter first clean and then spattered with blood.

Funko has previously released a collection of figures inspired by Bryan Fuller’s critically acclaimed Hannibal TV series. Another version of Lecter from The Silence of the Lambs is also available, depicting the cannibalistic serial killer being carted around wearing a straitjacket and his iconic muzzle.

Funko lists the new toys as “Coming Soon,” so be sure to set a place at the dinner table.