New Friday the 13th Will Be an Origin Story, of Sorts

Things are finally starting to move along with Jason’s next outing, with Platinum Dunes’ new Friday the 13th film now searching for a director.

Platinum Dunes co-founder Brad Fuller recently talked about the project, explaining that writer Aaron Guzikowski was busy with script revisions. Well, it seems the latest version of Guzikowski’s script has now been delivered, and Fuller has announced that they are moving forward with it. Pretty much all that had been confirmed with regards to the new film’s approach is that it definitely will not be found footage, as previously whispered about. As of this week though, we’ve got a few clues as to what direction the new film could take.

“Aaron’s story has great characters,” Fuller told The Reel World, also hinting that the script is delving deep into the character and backstory of Jason. “You kind of have to understand Jason Voorhees, so we go back and we kind of started over and work our way forward,” he said. 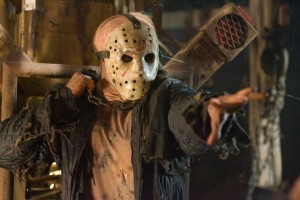 When asked by the site if this means an origin story, Fuller replied: “Origin-ish, but it’s an origin that no one has seen before,” before revealing that an appearance from Jason’s psychotically smothering mother can be expected. “Obviously Pamela’s there, but it’s a little bit different from what you’ve seen before.”

Early days yet, but it will be interesting to see who the studio set their sights on to step into the role made famous by the late Betsy Palmer. Hers are some big, bloodied shoes to fill, after all.

The current plan is for Jason (and Pamela) to return to the screen on Friday, January 13th, 2017.