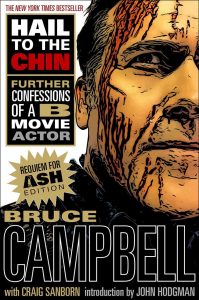 Despite officially retiring as Ash Williams, Bruce Campbell recently dropped some Evil Dead-themed teasers on Twitter. Turns out, he’s releasing an updated edition of his hilarious memoir Hail to the Chin: Further Confessions of a B Movie Actor as a kind of swan song for the iconic chainsaw-handed character.

Dubbed the “Requiem for Ash Edition,” this new edition of the book will feature new stories from Bruce’s life, including details from his European book took and a farewell to Ash. The book is full of the sardonic humour that Campbell is known for, along with a ton of great pictures.

According to an Amazon listing, the new edition will be released on September 17th, 2019.