David Lapham is what happens when Mark Millar (Kick-Ass) and Garth Ennis (Preacher) have a baby and that baby creates crime comics. The powerhouse behind the critically-acclaimed Stray Bullets, Lapham has gone on to work with almost every major comic house on the Eastern seaboard and has even taking over Garth Ennis’s writing duties on the infamous comic Crossed, proving that not only can he write one hell of a twist, but he can be pretty damn gory about it too. His newest work, in collaboration with his partner Maria Lapham, will see those two genres come together in a serial-killer driven work titled Lodger.

Coming in October 2018 from IDW’s newest imprint Black Crown, Lodger will tell the story of a handsome drifter who murders his way across the Midwest under the guise of a travel blogger known by his online handle as “Lodger.” With an uncanny ability to change his appearance, he travels the wilds of America with only a laptop and a burning desire to kill. Unbeknownst to him, following in his wake is a teenager named Ricky Toledo, a survivor of one of his murderous rampages, who is just as much in love with him as she is burning for revenge for her slaughtered mother and framed father. Billed as a psychological thriller, the comic promises to be filled to the brim with twisted obsession and a landscape littered with bodies. 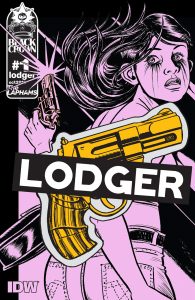 When asked about the project, Maria Lapham states:
“David and I rarely have time to work on stories that don’t fit into Stray Bullets continuity, but Shelly Bond and Ricky Toledo had other ideas. Lodger is a twisted love story – dark and grimy — like all the best crime noir. We can’t wait for readers to see it.”

Neither can the readers! Lodgers will be joining a growing collection of creator-owned titles from the Black Crown label including Euthanauts, Kid Lobotomy by Peter Mulligan and House Amuck by Christopher Sebela. For more info or to reserve yourself a copy, hop on down to your local comic shop and demand some comics!