New It Comes At Night Poster Goes Through The Red Door

A24 – the company behind The Witch and Green Room – are really drip-feeding us with regards to their upcoming chiller It Comes At Night, and the latest poster (pictured below) is another unsettling beaut that gives little away. 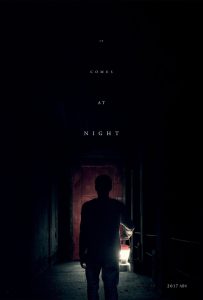 Synopsis:
A man (Joel Edgerton) learns that the evil stalking his family home may be only a prelude to horrors that come from within. Secure within a desolate home as an unnatural threat terrorizes the world, the tenuous domestic order he has established with his wife and son is put to the ultimate test with the arrival of a desperate young family seeking refuge. Despite the best intentions of both families, paranoia and mistrust boil over as the horrors outside creep ever-closer, awakening something hidden and monstrous within him as he learns that the protection of his family comes at the cost of his soul.

It Comes At Night will hit US screens on August 25th. In the meantime, have another look at the creepy-ass teaser.