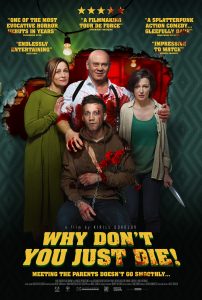 Ahead of its release this month, Arrow Video has released the opening scene of blood-soaked black comedy Why Don’t You Just Die!

The feature debut of writer-director Kirill Sokolov, Why Don’t You Just Die! opens with Matvey (Aleksandr Kuznetsov) trying to gain entry to his girlfriend’s parents’ apartment. His objective? Kill her father (Vitaliy Khaev) with a hammer to restore her honour.

Of course, things don’t exactly go to plan. The family patriarch proves a formidable and ruthless opponent, and Matvey himself is stubbornly unwilling to die. And as events spiral out of control, more secrets are revealed—and more blood begins to flow.

We described the film as a “roaring good time” in our review out of What The Fest!? last year. You can read the full review here.

Why Don’t You Just Die! releases on Blu-ray and Digital HD in the UK and US on April 20th, before arriving on the Arrow Video Channel on May 4th. Whet your appetite by checking out the opening scene below.