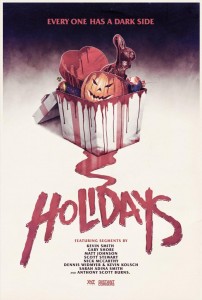 A new teasing clip has been released for the upcoming anthology horror Holidays and teases a likeness to Carrie as it pays homage to Brian De Palma’s classic from 1976. The clip comes from the segment Valentine’s Day from Starry Eyes duo Kevin Kolsch and Dennis Widmyer. In a recent interview, the directors said, “We wanted to tell a very dark tale of romance from the POV of a love-struck teenager. To us, that was a nice confluence of mixed emotions. We also don’t see a lot of movies with the setting of a High School dive team. So the world of the story felt unique to us.”

Check out the clip below, which shows a young girl tormented by her classmates in a vein similar to Carrie. The lighting is gorgeous. The stark contrast between the visual beauty and terror in the repetition of “maxi pad!” makes for an unnerving watch.

Holidays will be released later this year.