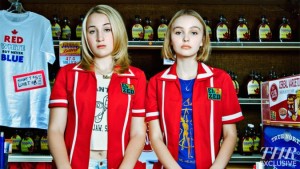 A new clip has been released for Kevin Smith’s (Red State, Tusk) Yoga Hosers and it totes pokes fun at Millennials in a non-basic way. To release a clip before a trailer is strange, but hopefully this means there will be a trailer on the way shortly. Check out the clip below and bask in its ironic teen-comedy feel that comes complete with a senior hottie, a couple of sassy, sexy sophmores and an invitation to a party on Friday night– awesome!

Yoga Hosers screened at Sundance film festival on Sunday, and unsurprisingly, it’s been met with a batch of mixed reviews. Some folk have declared it more fun and better than Tusk, but others appear to be unimpressed by its quirky and bizarre storyline. When it comes to Kevin Smith nothing should surprise you; he does what he damn wants, don’t you know?

The synopsis alone sounds crazy and it is as follows:
Colleen Collette and Colleen McKenzie are teenage besties from Winnipeg who love yoga and live on their smartphones. But when these sophomores get invited to a senior party by the school hottie, the Colleens accidentally uncover an ancient evil buried beneath their Canadian convenience store.