This New Clip from Abattoir Brings the Horror to Life

We recently brought your attention to Darren Lynn Bousman’s Abattoir; a film that follows a man who creates the ultimate haunted house by building it from rooms that people have died in. From home invasions to suicides and terrible accidents, the new clip below shows you some of the literal tragedies that make up this very real house of horrors. 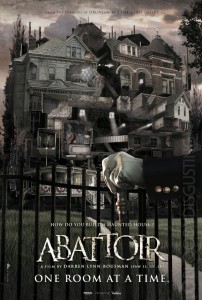 Synopsis:
Abattoir centres on a real estate reporter who unearths an urban legend about a house being built from rooms where horrific tragedies have occurred. The investigation ultimately leads to the enigmatic Jebediah Crone and the answer to the terrifying question, ‘How do you build a haunted house?’

This is definitely a film you should be keeping an eye on; it’s been on the horizon since a set of comic books based on the story were released in 2010. However, some changes have occurred from the comics to the film’s screenplay and as Bousman himself said, “I wanted the film to have a noir-based tone in it, and that includes the way that they talk.” Overall, he says, “The whole movie is about loss and tragedy, things being ripped from us — in this case, these rooms — and relationships. Imagine if you were in a place that was only tragedies.” Abattoir recently screened at the Los Angeles Film Festival and if the reactions on Twitter are anything to go by, it’s a good’un.