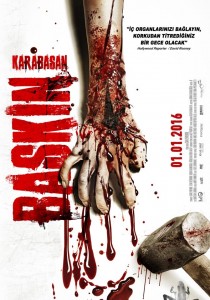 A film that we can’t wait to see in the UK is the Turkish horror Baskin, which looks like one of the most brutal films ever made. It’s screening at TIFF this year was compared to the controversial screening of Martyrs back in 2008.

To emphasise the film’s brutality a new, bloody poster has been released and it looks gory as hell – which is fitting. Check it out below and have a watch of the trailer too.

Baskin will be released in Germany and Turkey on 1st January 2016, Happy New Year indeed.