Tyler Perry is continuing to do what he does best and is helming a new horror spoof titled Boo! A Madea Halloween. The first poster for the film has been released and it, quite brazenly, parodies the poster for John Carpenter’s classic slasher Halloween. 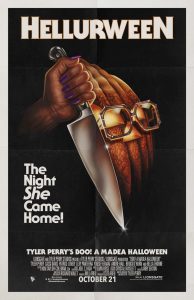 Synopsis:
Madea winds up in the middle of mayhem when she spends a hilarious, haunted Halloween fending off killers, paranormal poltergeists, ghosts, ghouls and zombies while keeping a watchful eye on a group of misbehaving teens.”

It’s not a bad poster at all, but these films only appeal to a certain audience and I’m not sure I fit into that category. If you want some less scary frights this Halloween then this may be the for you. Boo! A Madea Halloween stars Bella Thorner, Tyler Perry – who has also written and directed the film – as well as John West Kr., Kian Lawley and Yousef Erakat.

Boo! A Madea Halloween will be released on 21st October 2016.