New Art and First Still from Day of the Dead: Bloodline

Over the last couple of days, Millennium Films and Saban Films have given us both the ace new poster art and the first official still from their Day of the Dead: Bloodline, a reimagining of George A. Romero’s bleak 1985 classic. 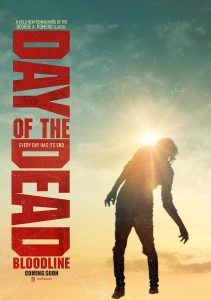 Synopsis:
Day of the Dead: Bloodline is set in a post-apocalyptic, zombie-filled world where a former med school student is tormented by a dark figure from her past. The only thing is, he’s a half-human, half-zombie hell-bent on destroying her world.

In the wake of Romero’s passing, it’s hard not to think that this remake is something we really don’t need, but I’ll try my best to keep an open mind. Day of the Dead: Bloodline hits US cinemas, VOD, and Digital HD on January 5th, 2018.