A second trailer has been released for Another Wolfcop, the follow-up to Lowell Dean’s 2014 festival hit, and it shows the titular officer of the claw up to his usual tricks, drinking, killing and playing some hockey. 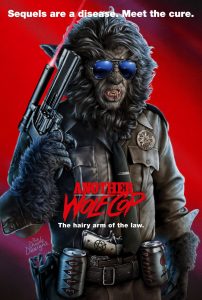 Another Wolfcop sees Leo Fafard reprise his role of police officer Lou Garou, who by night transforms into his decidedly furrier alter-ego, the hard-drinkin’ Wolfcop. Yannick Bisson (TV’s Murdoch Mysteries) co-stars as super villain Sydney Swallows, and the film also features a cameo from Kevin Smith, as seen in the previous trailer.

Earlier this year the film was given this quite brilliant poster, which is a wicked parody of the celebrated artwork for Stallone action ‘classic’ Cobra, created by The Dude Designs.

Another Wolfcop hits US screens on December 1st, from Parade Deck Films.