Among the treats on offer at this year’s Horror Channel Frightfest – which revealed another stellar lineup on Friday – is anarchic road movie 68 Kill, which was written and directed by Troma alumnus and Cheap Thrills writer Trent Haaga. The announcement was followed by the appearance of a new still, which you can see here. 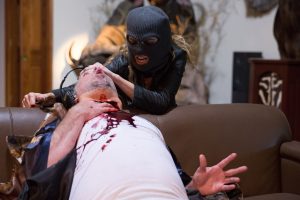 An adaptation of Bryan Smith’s novel, 68 Kill stars Matthew Gray Gubler (Excision, Life After Beth) as Chip, who goes along with a series of increasingly bad deeds after agreeing to help his violent, nihilistic girlfriend Liza (The Haunting of Molly Hartley’s AnnaLynne McCord) steal $68,000.

68 Kill had its world premiere at this year’s SXSW festival, where it drove away with the Best Midnighter Audience Award. London’s Frightfest will play host to the film’s European premiere on Friday, 25th August.