New 31 Poster Takes You to the Carnival

The artwork just keeps pouring in for Rob Zombie’s 31. Following on from the series of four character posters released last month comes this beauty, which could not be more in-keeping with the film’s carnival setting. 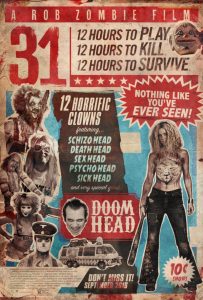 The poster looks like an advertising board for an all-American monster truck show or Deep South wrestling match. It comes ahead of the one-night event which will see Zombie’s latest playing 400 screens across the US, together with music videos, a making of film and a Q&A with Zombie filmed especially for the event. The screenings will take place on September 1st, with the film more widely rolled out on October 21st. A US VOD release will arrive on September 16th.

Five carnival workers are kidnapped and held hostage in an abandoned, Hell-like compound where they are forced to participate in a violent game, the goal of which is to survive twelve hours against a gang of sadistic clowns. 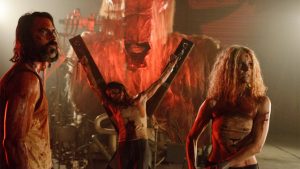 31 had its world premiere all the way back in January at Sundance. UK audiences’ first chance to see the film will be at London’s Frightfest on Sunday, 28th August.