Never Sleep Again with the New Poster for Stranger Things

Stranger Things is a beautiful thing; a brilliantly scary modern series that is, almost, universally loved and it loves horror, the 80’s and sci-fi as much as us. A new poster for the 80s-style Netflix series has been released and it throws back to one of our favourite horror films: A Nightmare on Elm Street. 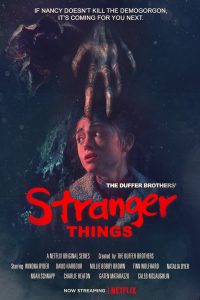 The caption reads: “If Nancy doesn’t kill the Demogorgon, It’s coming for you next”. It’s a brilliant homage to an iconic genre film and we think it would lovely on the walls at Scream towers. Considering the latest trailer took us back to 1984, it’s a nice touch to hark back to Freddy Krueger and the spooked of Elm Street. Whoever made it: show yourself!

Stranger Things Season 2 will pick up 1 year after the events of the first season and will, once again, show terrors unleashed from the ominous world of the Upside Down. Star Finn Wolfhard recently told fans that season 2 of the smash show will be “darker” and “more horror oriented“. We thought season 1 was pretty dark and horror oriented!

Synopsis:
It’s 1984 and the citizens of Hawkins, Indiana, are still reeling from the horrors of the demogorgon and the secrets of Hawkins Lab. Will Byers has been rescued from the Upside Down, but a bigger, sinister entity still threatens those who survived.

Be sure to tune into Netflix on 27th October to binge Stranger Things Season 2 until your dark heart is content.