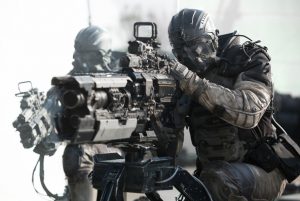 Netflix has nabbed the rights to the action sci-fi feature Spectral which was originally planned to be released theatrically over the summer. However, it is now arriving on Netflix on 9th December.

The film has been described as a mix of Ghostbusters and Black Hawk Down and from its synopsis it’s easy to see why; Spectral will follow a Special Ops team of Delta Force soldiers as they do battle with mysterious supernatural entities in a war-torn city.

The premise sounds extremely promising, but it’s always worrying when a film is pulled from a theatrical run. Hopefully the film will be able to offer a simple, entertaining popcorn flick that will be perfect for a Friday night. If not, we can just switch off and choose something else; such is the power of on-demand viewing.