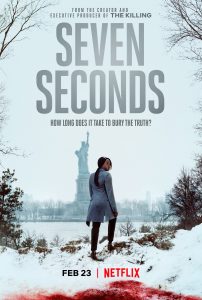 Netflix has acquired the rights to the racially-charged anthological series Seven Seconds. From the creator of The Killing – Veena Sudd – the show will follow the events that unfold after a white police officer accidentally hits and critically injures a black teenager.

To say the story is a timely one is obvious, but racial tensions will (probably) always be a part of the societies that we live in. We look forward to seeing how Seven Seconds explores race and dark, realistic drama.

Seven Seconds will hit Netflix on 23rd February 2018 and stars Regina King, Clare-Hope Ashitey, Russell Hornsby, Beau Knapp and Michael Mosely. Check out the short and sweet teaser below, which shows a woman looking distraught as she discovers a sheet of snow covered in blood.