It looks like the horror event of the summer might just be Netflix’s Fear Street Trilogy, which promises to tell a terrifying story across three films released over the course of three weeks. And if you don’t believe me, check out the official trailer below!

Directed by Leigh Janiak (Honeymoon), the trilogy is based on R.L. Stine’s best-selling Fear Street teen horror series and centres around a group of teenagers in 1994 who discover that the terrifying events that have haunted the town of Shadyside for generations may all be connected—and they may be the next targets. Here’s a quick breakdown of the three films: 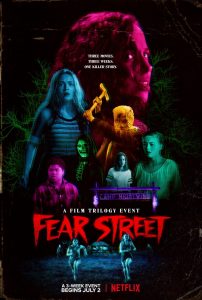 Releasing on July 2nd, Fear Street Part One: 1994 sees the circle of friends accidentally encountering the ancient evil responsible for a series of brutal murders that have plagued their town for over 300 years.

Then, releasing one week later on July 9, Fear Street Part Two: 1978 is set during the summer holidays when the activities at Camp Nightwing are about to begin. But when another Shadysider is possessed with the urge to kill, the fun in the sun becomes a gruesome fight for survival.

Finally, on July 16, Fear Street Part Three: 1666 will reveal the origins of Sarah Fier’s curse as history comes full circle on a night that changes the lives of Shadysiders forever.