On-demand giant Netflix has officially announced the commencement of production on Stranger Things season two, hooray! With a fitting upside down picture of the cast carrying out a table reading, the official Netflix Twitter account announced: “sƃuıɥʇɹǝƃuɐɹʇs# ɹɐǝʎ ʇxǝu noʎ ǝǝs uoıʇɔnpoɹd uı ʞɔɐq”! Wonderful. Here it is for those of us NOT in the upside down: “back in production, see you next year, #strangerthings“. 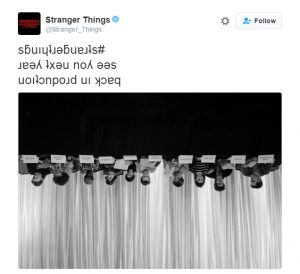 The picture confirmed the return of Millie Bobby Brown and her character of Eleven, but also features the other young stars of the show, including Caleb McLaughlin’s Lucas, Charlie Heaton’s Jonathan and Natalie Dyer’s Nancy. We can’t wait for another season in the Upside Down, because we had such a blast last time.