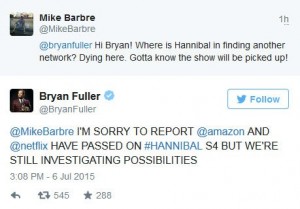 Hannibal fans prepare to weep as Bryan Fuller has tweeted that both Netflix and Amazon have passed on giving Hannibal a home, so Season 4 will not be going ahead with either of these services. All is not totally lost though and it seems that Fuller is still intent on securing a future for the show, stating that other possibilities are being explored. With the cast being released from their contracts and now this sad news, Hannibal’s future is looking dubious, but I’m still hopeful.

For now, there’s still the final few episodes of Season 3 airing on NBC and apparently fans should be satisfied with the finale, even if that’s all we’re going to get.