A series adaptation of the comic book Nocterra is in the works over at Netflix. 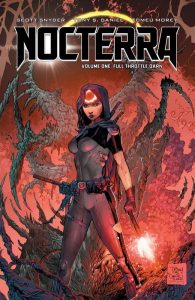 James Wan’s production company Atomic Monster is producing the series, which is being written by Robert Patino, who will also serve as showrunner and executive producer. Other executive producers on the project include James Wan, Michael Clear, and Rob Hackett.

Created by Scott Snyder and Tony S. Daniel, Image Comics’ Nocterra series is set in a world that has been plunged into an everlasting night that turns the living into monstrous “shades,” forcing people to stay close to artificial light in order to survive. Valentina “Val” Riggs works as a ferryman in this dangerous world, transporting people and goods along unlit roads with her heavily illuminated eighteen-wheeler.

The adaptation is currently in the early stages of development.