Darkly comic suspense thriller Small Crimes – which comes from director E.L. (Evan) Katz – is heading to SXSW in March for its world premiere. Ahead of then, Netflix has acquired the film for distribution in 2017. 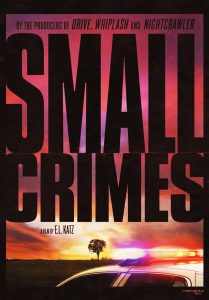 Macon Blair also co-wrote the film alongside director Katz, who previously directed Cheap Thrills and the ABCs of Death 2 segment A is for Amateur. He also wrote and produced two of Adam Wingard’s earlier films (Pop Skull and Home Sick), as well as penning 2008’s Autopsy.

Small Crimes follows a disgraced former cop who returns home seeking redemption following a six-year prison sentence for attempted murder. His search for inner peace however, only sees him become entangled in the mess he left behind.