US distributor IFC Midnight has been steadily building quite a catalogue of horror titles and their latest, The Dead Room, has just hit selected cinemas and VOD.

Directed by Jason Stutter (Diagnosis: Death), the supernatural shocker stars The Hobbit’s Jed Brophy and Jeffrey Thomas, plus newcomer Laura Petersen. Going by the official trailer, it looks to be a real nerve-rattler. Here’s hoping a UK release follows soon. 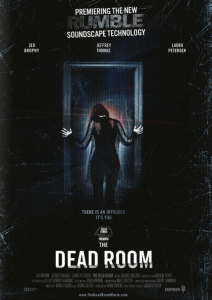 Synopsis:
Step inside the Dead Room, where something sinister guards a home’s horrifying secrets. Inspired by a 1970s urban legend, this atmospheric nerve-shredder follows two scientists (Thomas and Brophy) and a young psychic (Petersen) as they travel to the countryside to investigate mysterious goings on at a remote farmhouse. Skepticism quickly turns to terror, as the researchers’ presence unsettles a seriously angry demonic presence possessing the home.

Upping the haunted house movie ante with visceral camerawork and unsettling sound design, The Dead Room creates a sense of palpable danger lurking in every corner and hallway.