As the first reviews of Annabelle: Creation creep in from the LA Film Festival, Warner Bros. have put out this new trailer for the film, part of the ever-expanding web of The Conjuring spinoffs. The trailer comes to us just a day after the latest poster, which you can see below.

David F. Sandberg directs the New Line Cinema film, in which a doll maker and his wife welcome a nun and several orphans into their home, years after the death of their young daughter. Their guests however, soon find themselves under mortal threat from the doll maker’s possessed creation, Annabelle. 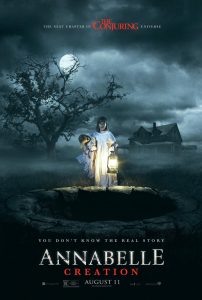 Sandberg directed the prequel from a screenplay by Annabelle writer Gary Dauberman, with James Wan and Peter Safran on producing duties. The director reunites with some key crew members from his 2016 hit Lights Out, including production designer Jennifer Spence, editor Michel Aller, director of photography Maxime Alexandre (The Other Side of the Door) and costume designer Leah Butler (Paranormal Activity 3 & 4).

Annabelle: Creation will be in cinemas from August 11th.