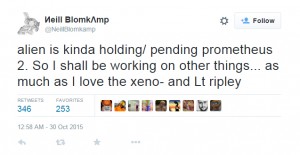 Director Neill Blomkamp took to Twitter to announce some disappointing news. Due to Ridley Scott’s upcoming Prometheus 2, he has had to leave his Alien sequel on the backburner. Albeit sad news, it is not that surprising. With Scott planning to shoot Alien: Paradise Lost next year, it wouldn’t even be released until 2017. This would mean that Blomkamp’s Alien sequel would not even start pre-production until that year.

A lot has happened since Fox announced the plan for Blomkamp to create a new Alien sequel; Scott has now confirmed a Prometheus sequel yet and Chappie has been been released. Sadly for Blomkamp, Chappie did not perform particularly well at the box office and only just managed to double its budget. His previous film Elysium made a lot of cash, but critically, it was not that well-received. Nonetheless, it can’t be denied that Blomkamp is a master of world-building and special effects, so it would definitely be interesting to see what he could do with Alien.

All is not lost, not yet anyway. This isn’t a confirmation that the Alien sequel is not going to be made at all, it’s just being put on hold for the foreseeable future. It’s a shame that Blomkamp won’t be able to put his mark on the Alien world just yet, but we are confident that the Prometheus sequel will be worth it. Imagine how great it’s going to be when Prometheus FINALLY reaches the Alien timeline!