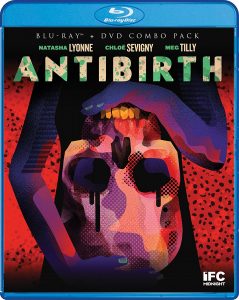 While UK audiences will have to wait until April to see it, drug-fuelled maternal body horror Antibirth lands on US DVD and blu-ray on February 7th from Scream Factory, in conjunction with IFC Midnight.

The film – which looks trippy, icky and awesome – stars Orange is the New Black’s Natasha Lyonne and Chloë Sevigny (Zodiac, Mr. Nice) as two slacker friends who enjoy a life of regular drug use and little to no responsibility, until Lyonne’s Lou awakes after a big night out with a particularly unusual and hugely accelerated pregnancy.

“As Lou’s due date approaches with alarming swiftness,” reads the press release, “the fear, paranoia, and conspiracy theories begin to pile up. Spiked with blasts of hallucinatory color, surreal shocks, and subversive comedy, the audacious feature debut from Danny Perez is a no-holds-barred descent into delirium.”

As well as storyboards and the requisite trailer, the DVD and blu-ray includes a set of ‘psychedelic shorts’.