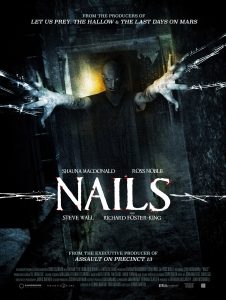 Synopsis:
After surviving an almost fatal accident, Dana (Shauna McDonald) recovers in hospital, but is soon terrorised by an evil presence that lurks in her room. Her fight for survival becomes a race against time as she struggles to convince those around her that her life is on the line.

Dana’s accident left her almost paralysed and unable to communicate without using an artificial voice program and this simple set-up allows the film to sidestep expected horror clichés, like running up the stairs or wandering around aimlessly asking if anyone is there. Director Dennis Bartok tries to exploit his protagonist’s helplessness in this way, but the film still manages to succumb to predictable horror tropes.

Moments of supposed suspense become unintentionally comedic, especially when Dana uses her voice program to ask “Who’s there?” and “What do you want?” when strange noises are heard. Rather than taking the opportunity to refrain from clichéd predictability, Nails easily sinks into dull familiarity as it becomes increasingly like a paint-by-numbers horror effort. The door to difference is held wide open, but Nails doesn’t take the chance and, instead, sits comfortably to hit every audience expectation.

Nails is as formulaic and tiresome as they come, even the characters can’t be saved from the film’s dire lack of originality. Aside from the entity that is lurking in her hospital room, Dana has to fight to save her marriage. Her husband, who must be stupid, recruits the help of a 20-something blonde bombshell to help take care of their teenage daughter. I’m not sure in what world a girl approaching 18 needs someone barely older than her to “watch her”, but here we are. It’s a poorly scripted ploy to increase Dana’s problems, extending them from the supernatural world to one that is very real, but this eye roll-worthy sub-plot is only a desperate means of adding an emotional layer to a film that is, pretty much, vacant of anything truly dramatic.

As the paranormal activity surrounding Dana increases as the threat to her home becomes more apparent, a commonly tackled commentary on motherhood and feminine identity begins to be exposed beneath Nails’ obvious horror exterior. The film’s eventual unravelling suggests that perhaps Dana’s inner turmoil was ever-present, her passion for running becoming a sub-conscience expression of her desire to escape from domesticity, but only to be tied down ever tightly. The supernatural force becomes a manifestation of a fear she never knew she had or one she wouldn’t like to admit – of losing everything to another woman. When she is able to confront this fear and escape her feeling of inferiority – because as always, all’s well that ends well – the supernatural terror can be overcome, leaving her to emerge on the other side as a brand new, stronger woman.

It is a shame that eventual “twist” ending can be seen a mile-off, thus making the film a ticking time bomb, leaving the audience waiting for an anti-climactic predictable finale that they’ll be anticipating. The lack of surprise just adds to Nails’ long list of issues and it is especially disappointing when you consider the other great Irish horror films that we have been treated to recently, especially Corin Hardy’s exquisite fairy tale-horror The Hallow.

Things go bump in the night for Shauna McDonald’s Dana, but there’s nothing truly terrifying about Nails’ off-screen spooks and poorly CGI-ed ghosts. If the film had taken more chances to create some genuine terror this may have been successfully scary, but Nails falls victim to its own fear of stepping outside its horror comfort zone and becomes just another hospital haunting.