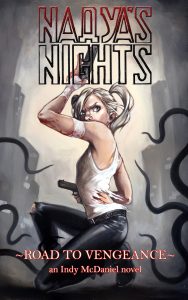 Right from the start you know that Nadya is one tough cookie. It only takes a few pages before she’s killed someone. She’s part of a tough Russian gang in London, sent by her boss to find out who killed fellow gang members during a drug deal gone wrong. After Nadya has dished out a violent and gory retribution she finds herself on the run, and the odds are stacked against her. She’s messed with the wrong people, and when she finds herself responsible for helping someone else, the complications don’t stop.

This is a comic book action world and as such the boundaries are blurred as Nadya encounters all kinds of supernatural foes, from a blobby tentacle monster and werewolves to vampires and rat people. There is something about a powerful werewolf galloping after a car and that “oh shit” moment that makes me happy. Unfortunately for her, after killing said werewolf, Remy, he becomes a vampire, a particularly nasty and sadistic one intent on revenge, and more than capable of it.

This is one fast paced action filled book. And I mean fast paced. There is barely a page of respite from the violence. In my head I pictured Nadya as a cross between Harley Quinn and Alice from Resident Evil. She enjoys the violence she dishes out and her skills are immense. There is plenty of gore throughout the book and Nadya takes a a lot of punishment. There is one particular chapter that was especially horrific and disturbing. Indy McDaniel has created a strong and fascinating heroine. As tough as she is, she has a sympathetic side which rounds her character out nicely. All the characters we meet are interesting, both in the enemies she battles and those she forms loose allegiances with. The story is divided into three of the titular nights, and takes place in both London and Paris. We get a fulfilling climatic battle between Nadya and the vampire, Remy. As the book ends a new plot threat sets us up for the next exciting instalment.

Indy McDaniel has a supporting site to the book including art and additional content, which takes the mythos beyond the written page. http://www.nadyasnights.com This book is action packed and most importantly, it’s fun. It won’t keep you up at night but you’re sure as hell going to enjoy reading it. I’m really looking forward to the next adventure of Nadya. It reads so quickly, that unfortunately, it will be over in a flash. Read it!